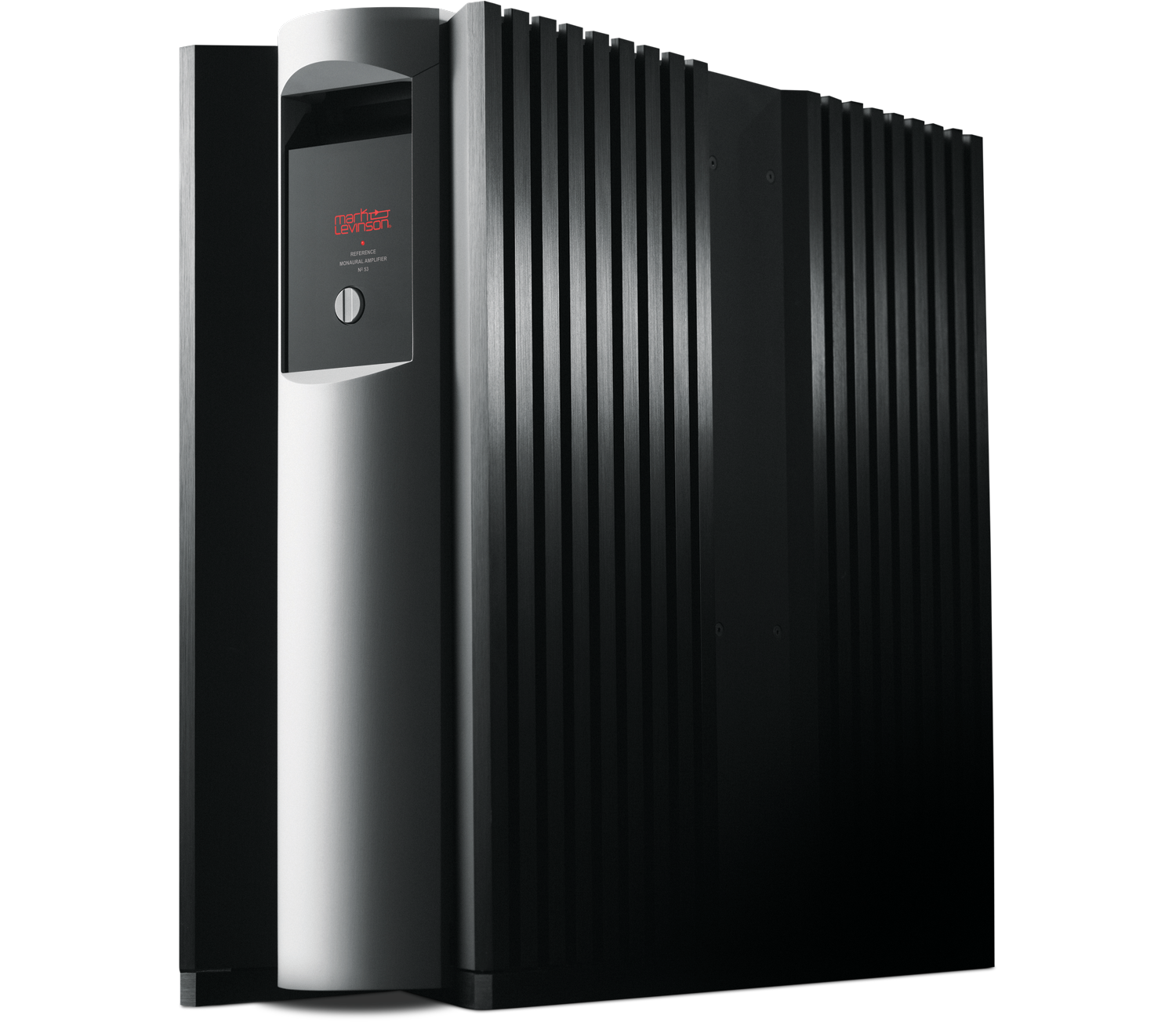 As with all Mark Levinson Reference products, the Nº53 is made to reproduce sound at the purest level possible. It truly exemplifies the fact that solid state electronics can rival even the best sounding tube-based designs.

The Nº53 is the first-ever switching power amplifier from Mark Levinson. Despite their numerous advantages – increased efficiency, more power, compact dimensions, decreased weight and less heat dissipation than their linear counterparts – switching power amplifiers have generally been viewed with skepticism from the audiophile community due to the technical limitations inherent in switching designs and assumptions about the resulting sound quality. The Nº53, however, is the end result of an extensive R&D effort to find ways to emphasize the advantages of switching power amplifiers while overcoming their weaknesses, creating a landmark product truly worthy of the Mark Levinson Reference designation.

The Nº53 is rated at an impressive 500 Watts into 8 ohms, measures merely 21"" H × 9"" W × 21"" D and weighs only 135 lbs — certainly playing up the strengths for which switching power amplifiers are known. It is capable of generating phenomenal power levels into virtually any speaker load to support both instantaneous and continuous demands. More impressive still, the Nº53 accomplishes this feat without the slightest change in performance capability while maintaining a constant, thermally balanced operating temperature. Unlike most switching amplifiers, the Nº53 has superbly efficient power management capabilities, so its operating temperature does not change no matter how hard or long the amplifier is driven.

Switching power amplifiers are so named because they switch the output devices on and off in very rapid succession, mimicking the input signal. One set of output devices drives the positive half of the waveform, and a separate set drives the negative half. The result is less power being wasted as heat, because the workload is essentially cut in half. Unfortunately, it also creates some significant design challenges in terms of how to manage the switching noise – the noise created from the output devices constantly turning on and off – as well as a phenomenon called “dead bands.” Traditionally, these have been the two contributing factors to switching power amplifiers’ reputation for inferior sound quality. However, Mark Levinson has raised the bar by breaking through these barriers with the Nº53.

The Nº53 removes switching noise without affecting the audio with the introduction of the new patented and proprietary Interleaved Power Technology (IPT) which, among other things, raises the switching frequency of the Nº53 to an extremely high 2MHz. The advantages of this are twofold: First, it pushes the fundamental switching noise and its harmonics far above the limit of human hearing, so that they have no direct affect on sound quality; second, it allows for easier removal of the switching noise from the signal by using much gentler filters, having no negative effect in the crucial audio band. The result is a frequency response that is ruler flat across the entire audio spectrum and is only a few dB down at 100kHz – impressive for any power amplifier, but staggering for a switching design.

The Nº53 has also overcome the “dead band” problem. Dead bands are silent gaps in the audio output, created when the output devices driving the positive half of the signal and the negative half of the signal are both turned off. This generally occurs at every “zero crossing point,” whenever the audio waveform crosses over from positive amplitude to negative amplitude or vice versa. This is a constant phenomenon – in a 20kHz audio signal, this point occurs 40,000 times per second. It becomes a problem, however, because even the best output devices are not able to turn on and off instantaneously, so the result is a number of “dead bands” of signal every second. Obviously, the larger the gap, the more detrimental to the audio signal. Many designs minimize dead bands by ensuring that both output devices are off for as brief a period as possible. Unfortunately, this increases the potential for the output devices to be on simultaneously, which can damage or destroy them. The Nº53, on the other hand, was designed using a patented technology that allows both sets of output devices to be on simultaneously for short periods of time, to completely eliminate dead bands without damaging the output devices or reducing their life expectancy. In other words, this solves the dead band problem and maintains the Nº53’s long-term reliability.

Power amplifiers’ challenge and goal is to amplify the incoming audio signal without distorting it and effortlessly drive a wide range of loudspeaker impedances at any volume level with the forcefulness and grace that reference-quality sound reproduction demands. The Nº53 is designed toward that end. The chassis is a compact vertical design consisting of three separate internal compartments to provide shielding and isolation of the different circuitry – the power supply in the bottom, the four amplifiers in the middle and the control circuitry in the top. The power supply is completely isolated and shielded from the rest of the amplifier to reduce interference from magnetic fields and high current devices. The extremely low-noise toroidal transformer features an oversized 2.8kVA transformer with four 47,000µF low-ESR capacitors. The middle section’s four amplifiers, featuring a pair of coils each, are arranged symmetrically and mirror-imaged to maintain separation.

Working together, the four amplifiers raise the effective switching frequency from 500kHz to 2MHz to produce the best sound quality known from a switching amplifier. The control circuitry has its own independent regulated power supply and is shielded from the rest of the amplifier to keep it from interfering with the audio circuits.

Not finding what you're looking for?